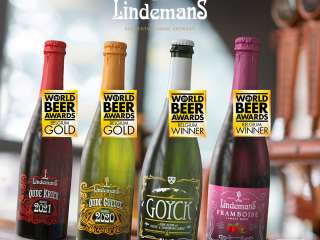 At the World Beer Awards in London, one of the most prestigious beer competitions in the world, Lindemans Brewery was recently declared 'Belgian Winner' in two separate categories. With these awards, the Belgian lambic brewer has qualified twice for the World Beer Awards final on September 9th, where the ‘World Winners’ will be chosen. In addition, Lindemans Brewery also won two gold medals. The winning brewers can now officially call themselves the 'best' in their respective countries for a year, and can include the exclusive, corresponding logo on the bottles.

Country Winner - Goyck (5% VOL): A blend of Lindemans lambic, a spontaneous fermentation beer with the typical Brettanomyces characteristics and Toots, a top fermentation beer from brewer Koenraad Goddeau. This beer is a unique combination of the fresh sour taste of lambic with the aromatic hops and fruity flavors of Toots beer. Goyck is the Belgian winner in the 'Sour & Wild Beer' category, Sour/Wild Ale style.

Gold Medal - Lindemans Old Gueuze Cuvée René (6% VOL): After a long fermentation and maturation process in oak casks, old and young lambic are mixed together. The blend is then re-fermented in a champagne bottle to create this distinct beer. This gourmet Geuze turns gold in the glass and has a complex and intriguing palate, with a light acidity and fruity cider-like taste on the head, rounded off with a dry, sour aftertaste. Lindemans Old Gueuze Cuvée René was awarded the gold medal in the 'Sour & Wild Beer, Gueuze style’ category.

Gold medal - Lindemans Old Kriek Cuvée René (7% VOL): Brewed with fresh Schaerbeek cherries, this is the most complex product from Lindemans Brewery. The traditional cherries are added to oak-aged lambic that has been aged at least 6 to 12 months. The cherries ferment in barrels with the lambic for at least 6 months until a cherry lambic is formed. After bottling and refermentation in the bottle, the result is a ruby-red colour, a reddish-pink head and fresh-sour aromas. The complex taste of the lambic and the powerful and pure taste of fresh Schaerbeek cherries characterize this traditional beer. Lindemans Old Kriek Cuvée René was awarded the gold medal in the 'Sour & Wild Beer, Kriek style category.

The results of the 'World Winners' will follow on September 9, 2021.