19.11.2019 Double gold for the Lindemans Brewery during Brussels Beer Challenge 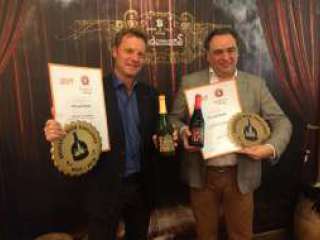 “We are very happy with this recognition for our traditional Old Gueuze and Old Kriek. Lindemans Old Kriek Cuvée René was awarded a gold medal earlier this year at the World Beer Awards 2019. Lambic is the basis of all our beers. We believe that focusing on tradition is the key to our succes": cousins Dirk Lindemans and Geert Lindemans, the 6th generation at the helm of the brewery.
This year, 1650 beers from 35 countries participated in this annual beer competition. During 3 days, a panel of internationally renowned beer connoisseurs tasted beers from all over the world. The participating beers were subdivided according to origin, type of beer and style. The best beers in each category were announced during 'Horeca Expo',  the biggest Belgian professional fair for the catering industry at Flanders Expo in Ghent.
The Lindemans Brewery has won several prizes from the Brussels Beer Challenge. Last year, Lindemans Cassis won silver in the "Flavored beer: Fruit beer" category. Lindemans GingerGueuze was awarded as "Flavored bear:" Herb and Spice.