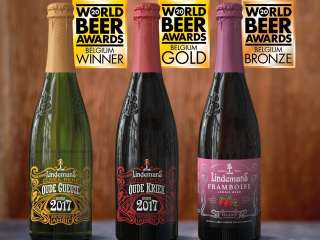 Lindemans Old Gueuze Cuvée René, one of the Lindemans Brewery’s jewels, is awarded as World's Best Gueuze during the World Beer Awards in London - one of the most prestigious beer competitions in the world. Lindemans Old Kriek Cuvée René (gold) – no doubt the brewery’s masterpiece - and Lindemans Framboise (bronze) won prizes as well !

Lindemans Old Gueuze Cuvée René (6% ABV), a blend of 1-year-old lambic and lambic that is 2 to 3 years old, matured in large oak barrels, won in the category ‘Sour & Wild beer’. The jury: “this traditional beer with its slightly hazy, golden colour has Lovely aromas of straw and tart green apple, with a freshly popped popcorn note. Pleasant lemon tartness on the palate; well-balanced."

Old Kriek Cuvée René (7% ABV), the second winning Lindemans beer, is a complex beer brewed with whole cherries. Traditional cherries are added to lambic that is at least 6 months old. This blend referments for another 6 months, after which the beer is bottled for a 3rd refermentation. The result: a powerful taste, a superb balance between the fruity and sour notes and a ruby red glow with a pinkish-red foam.

The World Beer Awards in London annually rewards and promotes the very best internationally recognized beer styles. This year, 2,200 beers from more than 50 countries participated. The best beer is awarded per category / beer style - 9 in total.

Traditionally, all tastings with judges around the world are organized live, where judges come together to taste and assess all beers. However, due to the corona pandemic, the tastings were organized online and the beers were brought to the judges for home tasting instead. The assessments took place through multiple online Zoom sessions.

An overview of all winners of the 2020 edition: